Who is the better team – Manchester United or Everton?

Who is the better team, Manchester United or Everton.

So this is the big one in terms of many Everton fans this season.  Lets get something straight first of all.  David Moyes did a really good job in his time as Everton manager.  He turned our team around and bought in some great players.  We were strong without being creative.  Since he left though he has acted like a complete prick.  He ruined a lot of the great work he did with Everton and has left a sour taste in the mouths of many Evertonians.  For someone that always brought a sense of style and class, overnight these morals seemed to leave the man.

Both teams are in a period of transition.  To take over from the greatest manager in the modern era is no mean feat and although the United team won the league, it is a team that needed a massive change and the likes of Bayern Munich and Barcelona have shown how far United have dropped in the pecking order on the world stage.  Sir Alex left David Moyes with a fairly average team (By Manchester United standards) and he has quite a job on his hands.

The teams for this are difficult to call.  Manchester United still have a wealth of talent available, emphasised by the fact that Wilfried Zaha can’t even get on the bench and Roberto Martinez always has a few surprises up his sleeve.

I expect that Manchester United will play Ryan Giggs as he was rested against Spurs and I fully expect our bogeyman Robin Van Persie to be fit for this.  There is a bit of guesswork involved but we shall see. I’m hoping Moyes plays Ashley Young……… Oh and Bebe!

For Everton I think the impressive Deulofeu will have given Roberto Martinez something to think about, but I expect him to drop to the bench alongside Leon Osman, with the rested Ross Barkley and Kevin Mirallas stepping in.

De Gea is a fantastic keeper and has overcome his initial sticky patch.  He is a quality shot stopper and should keep the United gloves for a number of years.  He is still only 23 so is miles away from being at his prime, so he will be prone to a few errors, but he really is a special keeper.

Ex-Manchester United keeper Tim is still a very good keeper having kept clean sheets in 7 of his 13 matches.  I still believe he is one of the best in the Premier League.

I expect Rafael to come back in at right back in place of Chris Smalling.  The defender has come on leaps and bounds over the last few seasons and is becoming one of the best right-backs in the Premier League.  He has been injured the last few weeks, but made the bench against Spurs.

Like Rafael, Coleman is one of the most improved players in the Premier League and I’m a little surprised that David Moyes didn’t bid for him too as he seems to love Everton players! Scored against Stoke, although not sure he hit it right 😉 Quality and will look to attack Evra

Talk in the media that Vidic is past it is well exaggerated in my opinion.  He is still Manchester Uniteds best defender and it is only fitness where he is suffering.  If he plays, he makes it harder for any opposition to score.  I think Lukaku will relish this one.

The Everton version of Vidic, he gives us the defence stability that we need.  He is a captain and a leader.  If only he could score more goals.

Another player that is much maligned in the media, yet loved by the fans.  Evans took a while to settle into the United side after breaking through fairly young.  He is 25 now and is fast becoming the main Manchester United defender.

Distin could have a busy day against Manchester United as this may become a big ask with Bryan Oviedo covering for Leighton Baines.  Distin is a man that can help cover though.  His experience could be cruicial.  Old, but quality. 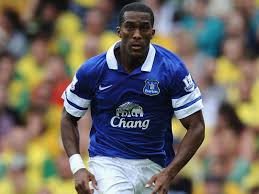 The milkman could be in for a long night

Out of contract at United at the end of the season and seemingly out the door after David Moyes chase of Leighton Baines.  Evra is still a decent player and is playing well.  He is a player that can get caught out of position a lot though, because he offers a massive attacking threat, but doesn’t always get the cover he wants.  Everton should target the left-back spot.

First start at left-back and his first goal for Everton.  Oviedo will be on top of the world going in to this match.  He played a blinder against a poor Stoke team but United will be a different kettle of fish.

Fellaini is getting a lot of stick from Manchester United fans at the moment and it is reminiscent about when he joined Everton.  The truth is, it will take him time to settle.  On his day, he is a monster.  He does slow play down a lot though.  I am glad we are facing him when not at his peak.  So I will rate him on where he is now, not what he has been as normally he would be in the 9’s.

I love James McCarthy.  He is fast becoming one of my favourite Everton players.  He isn’t snazzy, he isn’t quick and he isn’t overly skilful – BUT he puts in 110% and gets stuck in.  He is quality and wouldn’t have looked out of place in a decent United side.

In my opinion he is the greatest Premier League player of all time.  This is the only year he hasn’t scored in the Premier League and I would have my house on it that he scores against us. He’s 40 now and although the legs aren’t there, the quality still is.  He has adapted his game from a flying winger to a central midfielder and to still be playing at the top level at his age is quite a feat. Legend.

He is probably the player that suits our style.  He links defence to attack with quick 2 touch football and gets stuck in.  I imagine he will be the player to track Wayne Rooney is he drops deep. Great signing.

I have gone for Valencia on the right for United.  I think Moyes will be wary of the Everton threat from the flanks and he is very good at nullifying this.  Valencia is a confidence player and often takes a battering from United fans.  He would probably suit a team like Everton.

Super Kev was rested against Stoke, but I fully expect him to come back into the side in place of Gerard Deulofeu.  He will be up for this match to payback Moyes on all the times he had to track back.  Super Kev doesn’t like Scottish Training.  He likes warm Iberian training.

Zanuzaj is a little diamond and United fans are excited about what they are seeing and I can’t blame them.  He seems to have come from nowhere. Somehow he has been included on the Young Sports Personality of the year? WTF? He has been rested for a while, so I expect him to come back in against us.

Our own youngster is also making waves and I expect him to come back in for this one.  He had a cracking game against the shite in the derby and was rested for Stoke.  He has all the talent to be our next Rooney – Lets just hope he stays longer.

Cometh the man,  cometh the moment.  He always plays rubbish against us, lets hope it continues. World class and proves himself time and time again.

Probably a decent game for the diminutive South African.  He has skills and he also gets stuck in.  He will probably have the space to be able to work his magic as I expect United will push forward a lot.

He may be injured, in which case I’d expect Shinji Kagawa or hopefully Tom Cleverly to come into the team.  He really is our bogie man though.  He always scores against us.  He will do sod all and then hit a wonder goal. Quality player.

Really difficult to rate the players on this.  I try to do my ratings on a game by game basis, but this Manchester United team isn’t the same one of the past.

On paper and on history United should win this.  Everton haven’t won at Chelsea, Arsenal or Manchester United for over 10 years and David Moyes stated that we always went to Old Trafford to try not to lose.  The Roberto Martinez philosophy is different and I expect us to go to attack and try and win the game.

We have the team to get the win, but I think United will step up a gear in front of the floodlights and be comfortable.  I hope I’m proved wrong.

Do you think Everton will win?  Have your say at www.theevertonforum.com