Who is the better team? Everton or Stoke

Who is the better team? Everton or Stoke

This match should be a formality for Everton who face a Stoke team devoid of a few crucial first team players.  That said though, you can never tell which team Mark Hughes will put out and I’m guessing against his old club (who he seems to hold a grudge against) he will have his Stoke team fired up.

Stoke are missing both Robert Huth and Marko Arnautovic, but have Kenwyne Jones, Stephen Ireland and Marc Wilson back in the squad.

Everton will have to do without Leighton Baines with the England star out of action for up to 6 weeks.

So these teams could very quite a lot.  Stoke could face a big reshuffle and Everton could opt for a back 3, so this is a bit of a stab in the dark.

Tim Howard has been solid all season, but came under criticism at the weekend for his positioning of the wall against Liverpool.  Overall he has been a decent keeper for Everton and is enjoying a decent season.  He has kept 6 clean sheet this season in 12 games.

Begovic is one of the best keepers in the Premier League and Stoke City will do well to keep hold of him with Manchester City sniffing around the talented glovesman.  He has conceded only 1 less goal than Everton this season despite being 8 points behind and this tells a tale about Stoke as a team. 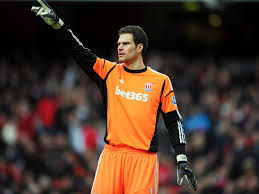 Coleman has been superb for a while for Everton and is forming a decent partnership down the right hand side with Kevin Mirallas.  The 25 year old has been linked with Arsenal in recent weeks and is fast becoming one of the best full backs in the Premier League.

I think that Marc Wilson will start over Wilkinson with Geoff Cameron moving to centreback.  Wilson has played in midfield for Stoke on a few occasions this season and really doesn’t look anything special.  Although Stoke fans may disagree?

Old School tackler who gets the job done.  Jags is a decent centre back and is our captain.  England’s main defender.

Cameron is likely to be moved to centreback where he has played many times before.  He is decent, he has settled in to the Prem well and will marshall the Stoke defence well.  He was providing a decent attacking threat down the right for Stoke, so he may still figure there instead.

I’m sure he’s a cyborg.  Definitely been drinking from the same cup as Ryan Giggs…….

The Milkman always delivers but surely he must be coming to the end of his career?  Maybe some time in 2016 the way he is going.

Shawcross seems to have gone backwards in the last couple of years.  A couple of years ago he was very close to breaking in to the England team, but that seems miles off now.  Decent in the air, but can lack pace, it will be an interesting battle against Romelu Lukaku.  I know who I fancy at the moment.

Oviedo has hardly figured since his £1.8m move from Copenhagen nearly 1 and a half years ago, but following Leighton Baines injury he could feature against Stoke.  He is an attacking wingback, so Stoke may look to attack us here.  Going forward he can be electric, I’m not convinced by his defending.  Saying that, we haven’t really seen enough to judge yet.

Pieters is a fairly solid left back and is growing into life in the Premier League.  Stoke fans seem quite impressed with him so far.  Seems a decent signing.

McCarthy gets better by the game.  He does the dirty work alongside Gareth Barry that allows our flair players to create chances.  He is a machine, he is everywhere.  Worried quite a few people at the original cost, but is going along way to justify the price.

N’Zonzi was the player that Everton chose not to sign after he met David Moyes.  Moyes wasn’t impressed with his attitude and there has been evidence of it at Stoke.  He is a talented player though no question.  He does slow the play down for Stoke and I think if we press him, he could make a mistake.

Gareth Barry has been fantastic for Everton since signing.  He isn’t afraid to put a tackle in (Sometime people wince before he does it) and he links the attack well from defence.  He doesn’t have the pace or mobility of many midfielders, but he does have vision and a decent pass.  Very good player, but most opposition fans wouldn’t see that.

Whelan is one of those decent enough players, who often gets underrated by opposition supporters.  Kind of like Gareth Barry.  He seems to balance Stoke well and maybe with better players around him he would stand out a little more.

He has had a lot of press coverage this week after demolishing rat boy in the derby.  The press forgot that Suarez put Mirallas out for a few weeks last season.  That isn’t his game though, Kev is a scorer and an assister.  He will look to attack the Stoke left back and this could be an area we exploit.

Like N’Zonzi, Ireland is a very good player but a bit of a fruitloop.  The move to Stoke will probably revitalise his career.  He probably still needs a run of games and fitness, but if we don’t watch him he could be dangerous.

Ross had a cracking derby, despite the little dive that he needs to stamp out of his game now.  He will go on to great things.  He is the creative spark that Lukaku needs.  Quality player.

A little bit leftfield from me, but I think this is the game to throw him in for.  At home against a Stoke team with a few injuries.  The lad has skills to pay the bills.  He is raw, but he is dynamic.  Amazing talent and one we need to start utilising.  I think Pienaar may be rested, or possibly moved into CM if Barry plays left back.

Everton fan Walters got a lot of stick last season, but he was doing the work of quite a few.  I think he’s a talent and he does know where the net it.

The best is on fire. 7 goals in 7 starts is a cracking return.  Following a brace against Liverpool, I expect big Rom to be fired up and he will fancy his chances against a makeshift back four.  I may go and have a first goalscorer bet on him now.

Crouchie seems to have forced his way back into the Stoke side, but does he really offer much threat any more?  Possibly not! But he always seems to do quite well against Everton and at 12ft 8, he could cause problems in the air.  That said, I’m sure I read that Stoke hadn’t scored a headed goal, or at least a headed goal from a corner this season.  Very un-Stokelike.

On paper this should be a home banker.  Everton are playing well and with Lukaku they have the goals that win matches.  Stoke are missing a few players and will have to change around a strong back 4.

Hopefully we can humiliate Mark Hughes as he is a bit of a cock.  We will have to be wary not to be over confident though as Stoke can be a solid unit and could nick the odd goal.