What can Chelsea, Arsenal or Manchester United Fans expect from Fellaini – A Fans View

What can Chelsea, Arsenal or Manchester United Fans expect from Fellaini – A Fans View

Marouane Fellaini is expected to leave Everton after Arsenal reportedly matched his release clause thought to be in the region of £23-26m.  It is expected that Manchester United, Chelsea and some large foreign teams will soon follow suit.

Belgium international Fellaini is only 25 years old and when signed from Standard Liege in 2008 was Everton’s club record signing at the age of 21.  He quickly built up a bit of a reputation in the press having been booked 10 times in his first 17 games scoring 9 goals by the end of the season.  This reputation seems to have stuck, but in reality, Fellaini isn’t a dirty player – but he does have the odd lapse (The Stoke headbutt for example for which he was vilified by Everton fans – something Liverpool fans would have done well to observe). 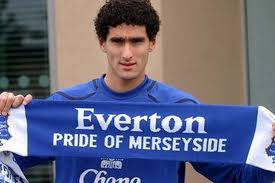 Opposing fans often see Fellaini as a big lump that you can knock the ball up to, but in reality he is far from this.

What are the main things a team can expect from Fellaini?

Midfield – Despite what Match of the Day and David Moyes tactics may have lead you to believe, Fellaini isn’t actually a striker or attacking midfielder and he doesn’t rely on the ball in the air.  Fellaini is actually a very talented footballer and with the ball at the feet he rarely loses possession.  His best position is definitely central midfield, often in a defensive position, but he has the engine to go box to box.  As stated before, he can also be useful for a plan B if a game isn’t going your way and sticking the big man up top can scare defenders.  He has a natural ability to chest the ball into his feet. 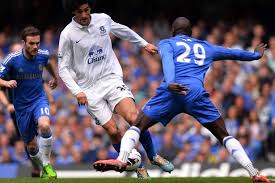 Goals – The big man knows where the net is.  Whether it’s with his feet or head, Fellaini has a knack of scoring and he does it well.  He is still only young and will definitely improve, but last season he finished with 12 goals in all competitions on top of 7 assists.

Tackling – Felli enjoyed a 73% success rate in tackling this season.  His gangly body and long legs make it difficult for attackers to get away from him and he finds it quite easy to bundle the majority of players off the ball.

The Fellaini Spin – Classic turn from the big man, which he does quite a lot – http://www.youtube.com/watch?v=aZvv-oHdIaw

The Unflashy Lifestyle – Okay, maybe not completely as Fellaini loves the poontang, except when he had to move house……….. Fellaini himself doesn’t seem that bothered about money or extravagance, he drives an old classic Mercedes aswell as a Vauxhall Corsa, has an unkempt Afro and is generally just laid back!

If he does go any club that is fortunate enough to pick up Fellaini will have a very good player on their hands.  I think Fellaini has all the attributes to dominate any midfield battle and I know Everton fans will be gutted to lose him as he became a bit of a cult hero at Goodison Park, but we would rather lose Fellaini for decent money than Leighton Baines.

Opposition Fans come and have your say or ask any questions to Everton Fans at www.theevertonforum.com