This summer at Everton – The view of JMorgan93

This summer at Everton – The View of JMorgan93

With pre-season on the horizon, it is that time of year again where transfer gossip dominates the media headlines. As an Everton fan this is always a tough time, with a shoe string budget and a very ambitious fan base. This article will outline the summer transfer possibilities that I believe will take the great club forward.

Firstly I believe that finding a goalkeeper to rival Tim Howard is essential. A usually reliable Howard has had a few lapses over the past year, however with the emergence of now departed Jan Mucha as an alternative between the sticks, it seemed as if Howard flourished under the challenge of holding down his position.  A young goalkeeper is essential and I believe Martinez needs to look no further than former Wigan loanee Joel. This young goalkeeper showed excellent reflexes and a cool head under pressure when thrown into the FA Cup final, even producing an accomplished performance on our own doorstep during Wigan’s 3-0 FA Cup quarter final victory at Goodison Park. With limited opportunities at Atletico Madrid Joel may feel the need to move on in order to further his playing career, with a cut price fee possibly an option. 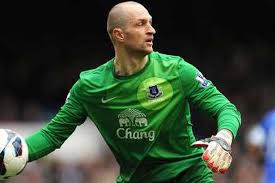 Secondly I believe that we need to have an alternative in the central midfield area. On too many occasions last season when matches were running away from us we did not have a plan B. With players such as Gibson, Osman, Fellaini and even Neville playing the central midfield roles last season we lacked pace and energy in that department. Two players that spring to mind in order to address this problem are Mohamed Diame and Leroy Fer. Firstly Leroy Fer has made it quite clear that he is interested in re-igniting his move to Goodison, however due to a string of impressive performances during the European Under 21 championships his price tag could fluctuate, ultimately pricing Everton out of a potential transfer. If Everton can negotiate a deal with the player he would be a welcome addition to the team , providing us with a dynamic midfielder not afraid to take on players and also with great passing ability, which would fit in perfectly to Martinez’s footballing concept. Alternatively Mohamed Diame has proved for a number of years that he can perform in the Premier League and with a mooted 3.5 million release clause, this player could be a bargain for the type of player we desperately need.

Diame has been solid for West Ham and Wigan

Finally taking into account the poor form of Nikica Jelavic last season and the distinct lack of goals in Victor Anichebe’s repertoire a goal scoring striker is needed if the club is going to catapult itself into European contention. Numerous strikers have been mentioned in newspapers with Spanish based players Roberto Soldado and Alberto Negredo on the tip of every Evertonian’s tongue. With Sevilla in major financial trouble at the moment, a bid for Negredo could be the more viable option in a cut price deal, however I still believe this player could be out of the clubs price range unless we sell any of our prized assets. Alternatively a man who Martinez knows well from his time as manager of Wigan, could well be an option in the form of Arouna Kone. In my opinion he is the type of striker Everton need as he has the pace to stretch opposition defences and even when not scoring goals he will create space for players such as Mirallas, Pienaar and Fellaini to work their magic. A signing like this may even be beneficial for Jelavic as with defenders being pre-occupied with the constant movement of Kone, it could well give Jelavic a greater freedom to find space in the penalty area and re-discover his predatory touch in front of goal. The only downside to this is his age, but a younger striker with the same attributes may fit the bill, although I do believe this type of player at a younger age may command a substantial transfer fee.

I appreciate every fan has their own individual opinion and many may not agree with what I have written, however i truly believe these signings will keep the club moving forward and give us alternative options when the going gets tough and we become predictable going forward, notably in games such as Norwich away from home and Swansea at home last season.

If you want to write a piece on Everton for MyEvertonNews.com, please email theevertonforum.com – We are always looking for Fan Contributions