Talking to the Opposition: Chelsea Fans

We spoke to our friends over on Chelsea forum The Shed End for their thoughts on this weekends match.  We got some great responses.

Check out the thread on The Everton Forum here: http://www.theevertonforum.co.uk/everton-forum/8294-talking-opposition-chelsea.html

1. Even though we’ve only had 3 Premier League games, how well do you think you have played this season?

SeanWB: I think we have played really well. It’s still early but the team already feels different then it did last year despite not having many new players starting so far. I think we could have maybe taken more then a point from Man U but I am satisfied with 7 points out of 9. We are playing better defensively which is so important in the PL and we do not appear to be giving up silly goals like last year.

charierre: We’ve go the job done without being spectacular.

Northerner: Good start, building stability from the back.

Scott Harris: Average, but that doesn’t bother me because it’s what i expected, i would rather start slow and improve as the season goes on. Starting on fire isn’t always a good thing.

2. Is absolutely everyone delighted with Mourinho making his return? Have you noticed any changes in his management?

Charles Ryder: Is the Pope Catholic? Does twelve minus five equal seven? Are the Australians absolutely rotten at playing cricket? Silly question! As for changes, aside from being somewhat mellower we’ve got our old Jose back.

Uno: Yes i think that pretty much everyone is happy he has returned. I thought he was very different pre season but now the season has started its like the old Jose we all knew and loved.

evetsneerg: Don’t know about everyone but I couldn’t be happier he is the special one after all and you can just tell he loves the club and has a way with players. Might not always been the most attacking football at times but we definitely won’t be losing many games with him back in charge.

3. What are you expecting out of the season? A title challenge? A long champions league run? Both?

Zeta Orionis: A decent PL challenge and to get to the final of a domestic cup. CL-wise we’ll probably go out around the quarter/semi finals. I don’t think we’re quite ready to be challenging on all fronts yet.

i-like-to-munich: A title challenge is something that each and every Chelsea supporter takes for granted these days, although with a few other teams upping their game i do think its going to be alot closer this year. As for a long Champions League run i dont think saying the Semi Finals would be being over confident, i dont think we will win it this year though.

Remodez: Top 3 and strong showing in the cups as usual, anything else is a bonus as far as I’m concerned. 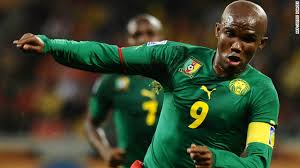 Eto’o could make his Chelsea debut

4. Are we likely to see Mata or Eto’o in the game at Goodison?

RMCM: I think mata will start on the right side, have no idea whether Eto’o or torres will start though. I’d like to see Eto’o, just to know what we have in him.

shedpensioner: I think we’ll see both, although I doubt Eto’o will start.

big blue: I think its likely both will play at some point, as neither are on international duty and will be fresh.

5. Has there been a stand out performer in the 3 Premier League games so far?

ForeverCarefree: my pick would be Oscar, he’s thriving in the middle and working very hard the defensive side of his game is now very good and his movement on the pitch is fantastic, knowing when to drop deep or drift wide. Big season for him this year.

ewitkows: Cech has been in brilliant form.

Uno: Gary Cahill for sure. He has done very well so far.

6. Where do you think you will finish this season?

evetsneerg: I hate to sound cocky but i really do think we have the team to do it and with Jose back I’ve got really confidence. Only thing that worries me a bit is City because they have quite a team so will have to watch them closely but if they lose to any more newly promoted teams like that it could be over before it even started for them.

7. Who will be the biggest threat to the Everton side on Saturday (apart from lampard)?

big blue: Hazard if he’s fit, but we have 5 or 6 potential match winners. Application will be the key, as it always is against Everton.

SeanWB: Oscar and Hazard have started really well and they are both handfuls for defenses. I would be terrified of them if they were on your team.
–

8. Have you seen much of our season? How do you think we have done?

Remodez: You’ve done pretty well in my view, already playing better than you have under Moyes. You’ve just been quite unfortunate with ref decisions and of course the missing of easy chances. Defence looks pretty solid from what I’ve seen, midfield now thatBarkley has finally been given a run is looking better. How Moyes picked Neville and Naismith over him is just baffling.

You just need better strikers really, Kone hasn’t looked all that great from what I’ve seen and Jelavic seems to still be suffering from his time under Moyes. Still early days and all, let’s hope Lukaku helps you with that.

charierre: Watched both the West Brom and Cardiff games , both you seemed lack a cutting edge.

ForeverCarefree: Only seen MOTD highlights. Personally I think you’ve done okay and are unlucky not to have more points so far. The main problem seem(ed) to be where the goals will come from.

9. What do you make of our fairly new manager Roberto Martinez? Do you think he’ll have success at Everton?

Scott Harris: Hard to say if he will be successful but personally i think he is a very lucky man to be in charge of a team like Everton.

evetsneerg: Yeah I like him but I don’t really see him improving the club any more than it is though can see him just taking off from where Moyes left and just carrying on in the same way.

Charles Ryder: Although I rate him and think he’s a great character I’m not too sure if he’ll have success at Everton, he’s the polar opposite of Moyes so it’s hard to judge whether or not his methods will spur you on to greater things.

10. We’ve recently accuired Romelu Lukaku, so what can you tell us about his game (apart from the obvious 17 goals for West Brom and being a monster)?

i-like-to-munich: You lot must be REALLY happy with that signing i think it was one of the biggest shocks of the transfer deadline day and if Ozil didnt go to Le Arse then i think it would have been THE BIGGEST News of the day. I think his form last season speaks for itself and we was silly to let him spend another season at another club. I think he will be a success where ever he goes though so good luck with him.

Uno: He is still quite raw, he needs to play games to work on his game. However as we all saw last season he can bang in a few goals if given the chance.

RMCM: He’s incredibly fast for his size, decent at holding up play and looks like he’ll become a world class player if he’s managed properly.

shedpensioner: He’s raw, very raw, but he definately has talent, he will score goals for you.

11. Who will be the biggest threat to your Chelsea side come next Saturday?

ForeverCarefree: Mirallas I think, quality player, not afraid to take his man on.

big blue: Ross Barkley, I saw the game away at arsenal last season and he was the best player on the pitch. He pooks like he’s going to step under martinez, and for me he’s englands most exciting prospect.

11. Where do you think we’ll finish this season?

shedpensioner: Anywhere from 8th to 14th.

ForeverCarefree: 8th-10th I think, this is a transitional season for you after 11 years with Moyes in charge but I think you’ll finish in the top half of the table comfortably.

big blue: Hope you finish ahead of Liverpool but I think you’ll finish 7th, one place behind the red half!

Uno: Bottom half. A short number of points above the 3 teams going down.

i-like-to-munich: Mid table is the best you can hope for i think.

RMCM: I can see 7th being a realistic place for you, just behind arsenal, spurs and liverpool.

SeanWB: 2-0 to us. Hazard and Terry with goals.

big blue: I have feeling it will be more open than recent history suggests, 3-1 to us, hazard, lampard, ivanovic. barkley.

evetsneerg: I’m going for it 3-0 Chelsea, Hazard, Lampard, Torres (and know Torres right but reckon he might have a little boost after the super cup performance he generally was pretty good and if he keeps that he will have a good season but i always hold out hope for Torres and he never quite delivers game in game out lol)

RMCM: Maybe i’m biased, but i think our attack is just too strong for your defence to handle, i’m going for 3-1 to us.