As Evertonians, I like to think we’re quite a knowledgeable and grounded group of football supporters.

We don’t tend to get delusional about our team, we rarely to get ideas above our station, we call matches as we see them and the last match (Everton 0-3 Spurs) we can surely all agree, was not good enough.

Yet, no matter who we play, we have basic and fair expectations.

On Saturday none of those elementary expectations were fulfilled and with it being the second poor performance in a row, we’re left with a conundrum; do we need to show patience that it’ll come good in time, do we look at the factors leading up to that result, take a step back to find some perspective or do we just hit the panic button?

Naturally, in the age of social media, huge transfer fees and the instant expectations that they bring, it’s very easy to opt for the panic button but I plea for patience and perspective.

The man who’s received the most criticism (sometimes fairly) since Saturday has undoubtedly been the Everton manager, Ronald Koeman. 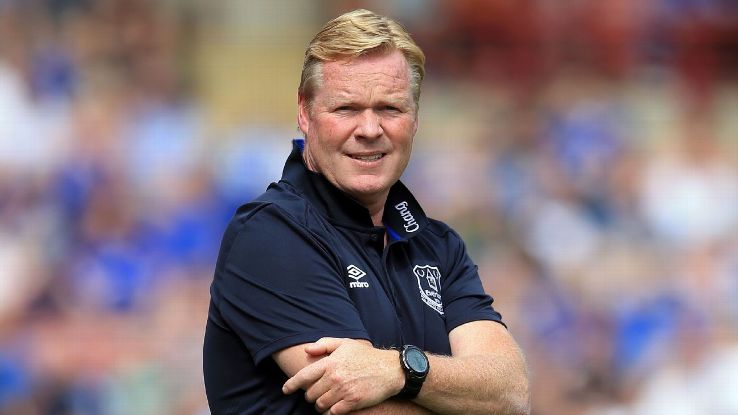 Whilst not being anywhere near perfect, the Dutchman’s first season in charge of Everton would probably be considered a relative success.

Koeman inherited a squad that had been very used to playing a completely different brand of football to that which Koeman wanted to deploy. Predecessor Roberto Martinez was very unorthodox, not only for sticking steadfast to his possession based ideology but also in his coaching methods.

Players were coached to ‘fitness’ using the ball rather than the traditional method of being run into the ground for a month prior to the season and consequently we saw a team that was more comfortable in possession but often out of shape and punished late in matches.

Further, the Martinez way of finessing players in public regardless of their form couldn’t be further from Ronald Koeman’s straight-talking no nonsense attitude. We’ve seen certain players, used to consistent praise react negatively to Koeman’s hard-truths approach and at times that appeared to rock the boat.

Anyway, after an inconsistent first half of the season in which Koeman tried to find his best team with mixed results, Everton improved and eventually came a respectable 7th.

The complete change in management style led to a number of players leaving the club and a number joining the club, to the point Koeman can now basically field a team made up entirely of his own signings – despite the fact he’s been at the club for just 1 season.

Indeed, 10 of the 11 who started the match last Saturday were Ronald Koeman signings, with Leighton Baines (playing in his 300th Premier League match for Everton) the only exception.

And so comes the complaint – ‘This is Ronald Koeman’s team, there are no excuses anymore’.

Yet, maybe I’m soft and maybe you’d consider me a bit of a ‘Koeman apologist’, but I think there are some legitimate ‘excuses’ to the patchy form we’ve shown to start this season.

First and foremost, it takes a time to build a functional football team.

Two lads who’ve arguably struggled the most; Sandro Ramirez and Davy Klaassen are new to the Premier League. It isn’t the rule that everybody who comes to England takes a long time to get acquainted but it’s not uncommon.

Neither have impressed but I feel strongly in saying neither should be written off after a handful of games in a new league.

Whether players come from a foreign league or from another club in England, it’s a massive ask to have 7 players new to the football club starting a game together against an established force like Spurs or Chelsea.

Whilst our lads looked like they barely knew each others names, our opposition had been not only playing together for considerably longer, but successful in playing together.

In both the Spurs and the Chelsea matches, our opposition showed plenty of cohesion whilst we had practically none among our rank.

There was nobody among the established Everton players setting the standard. No leadership and nobody taking responsibility to right the many wrongs among our performance.

I’ll admit I haven’t looked back at all of our starting 11s this campaign so far but I can only remember our defensive unit from Saturday starting together twice (both in the Europa league) and as far as I can recall, our attack from Saturday had never taken to the field together.

You have to say that showed. The defence was all over the place and the attack were each tuned in to completely different frequencies.

So although the boss is one year into his reign at Goodison, it still feels very much like he’s stood at the bottom of a mountain he’s yet to climb.

It is frustrating being told to have some patience when we see such fees being spent on players but it does take footballers time to gel together, time to get to know the intricacies of each other’s games and we just need to hope that happens sooner rather than later.

Many will say, ‘Ronald Koeman should’ve thought of this before he picked 11 lads who look like strangers together’ and I can’t disagree with that.

As I mentioned, 7 is a very high number of new players to let loose at once – let alone against the top sides. Ideally, you’d only throw in one or two new signings at any one time (keeping your nucleus together) but ultimately, these new players, in many cases bought for big money, will need to get used to playing together.

In theory, the more experiences that they have together on the football pitch, good or bad, the quicker they’ll form some sort of a bond.

I’ve tried not to mention it as I do think it’s an especially lame excuse but the fixtures haven’t been kind to us. I really don’t like to blame fixtures as everybody plays everybody twice but it’s a fact we’ve been unlucky.

In truth, as soon as the fixtures came out, given that I knew we’d likely have a summer of serious squad overhaul, I expected us to find Everton in the bottom half after 6 games.

Of course, I expected far better performances than the last 2 matches but results-wise, we’re more or less where I expected us to be. We beat the team we should’ve, we picked up a good point on the road and lost to last season’s top 2 – making the Europa League group stage along the way.

What makes the fixtures worse is the fact we haven’t had a good amount of preparation time for any of the tough games:

And guess what? We have Atalanta on Thursday, United on the Sunday.

If anybody thought the rigours of the Europa League were a myth – just take a look at those turnaround times before some of the toughest games we’ll play this season.

As far as I’m concerned, any team would struggle to deal with those fixtures straight off the bat in August/September. I’m sure other teams will have similar runs later in the season but they’ll be in their stride by then with a settled squad who ought to actually know how to play with each other.

You mix the cocktail of an unsettled squad who hardly know one and other, no time for rest between games, no preparation time for games and the fixtures we’ve had and you get yourselves a nightmare start to the season.

It’s tough when you see some of the inexcusable performances we’ve put in but we do need to get a sense of perspective before we reach for that panic button.

Could things have been done differently? Absolutely.

Moving forward, we’re at a point when the manager can’t just sit around and sulk because he didn’t get the striker he clearly wanted.

It seems clear that playing as though we do have a target man, as we reverted to on Saturday, simply won’t work. Koeman needs to come up with and implement a new game plan – quickly.

Whether that game plan involves dropping one of his new big money signings to the subs bench, is a decision he’ll have to make. Personally I think he’ll have to as I really don’t see Saturday’s starting 11 working for us.

If the manager makes the correct decision and deploys a team that doesn’t make schoolboy errors in defence (that’s you Ashley Williams and Cuco Martina) and does have a hint of width and pace, I’m still confident we can achieve something this season.

The thing is, it will take some time to get it together and as a fan base we can’t be losing our minds every time we hit a bump in the road. We’ll just need to be patient.

7 Simple Ways to Predict the Outcome of the Match﻿