I’m in love with a man called Bryan Oviedo

I’m in love with a man called Bryan Oviedo

So around 18 months ago, Everton signed a mysterious Costa Rican from FC Copenhagen called Bryan Oviedo.  Rumours over fee differed, some saying £1.8m and others saying £5m.  Evertonians were a little bemused, because who would take the place of the mecurial left-back Leighton Baines. 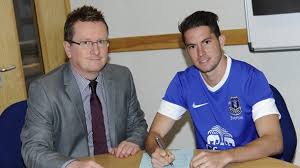 Time went on and we just saw fleeting appearances from the left sided player.  The odd carling cup run out and the odd substitute appearance with a few minutes to go.  Sometimes he looked amazing and other times he looked susceptible.

Months went by and we didn’t really see much of the player.  Everton Forums were giving differing opinions.  Some were saying the lad just needed to be given a chance and others were saying he just wasn’t good enough.   He was becoming a little bit of a cult figure, much like Denis Straqualursi or Jan Mucha.

Anyway, over the last couple of weeks, 1st choice left-back Leighton Baines got injured and there was lots of talk about who would replace him.  Some were saying Tony Hibbert could fill in or that Sylvain Distin had played there before.   Others talked of switching to 3 central defenders and playing John Stones or Antonlin Alcaraz at the back.  Others were saying go like for like and play Bryan.

Roberto had a few options.  He chose the Costa Rican.  He chose Bryan.

Evertonians were a little nervous.  How could the pacey defender perform in the Premier League.  His first game was against Stoke City.  This is a team renowned for being a bit brutal.  This is a team that has Shawcross and Huth (Although Huth didn’t play), 2 men that look like MMA fighters or Rugby players, this should have been a real test for Bryan.  It wasn’t.  He sailed through the match providing attacking threat after attacking thread.  He also defended when he needed to.  The lad also scored.  On his full debut he scored.  Legend.

Stoke never really turned up though, so Evertonians focussed on the away tie against Manchester United, the Premier League Champions.  There was talk of Bainsey being fit.  He was filmed on the pitch before hand in deep discussions with Roberto Martinez.  Twitter was awash with rumours.  Could Bryan be thrown out the team straight away.

The team news leaked and Bryan was back in.  He was facing one of the quickest, trickiest wingers in the league – Antonio Valencia.  We know Oviedo can attack, but can he defend.  The answer came back as a definite yes.  Oviedo was one of the best defenders on the pitch lastnight.  Hardly anything got past him.  I counted numerous slide tackles. His passing was crisp and he attacked when needed.

I was starting to get excited by the man named Bryan.  There were 4 minutes to go when I fell in love.  The ball squirmed to Oviedo and he slid it under David De Gea to go down in Evertonian folk law.  The first time we had beaten Manchester United at Old Trafford in 21 years.  David Moyes was gutted.  But I was in love with a man named Bryan.  The legend had scored again.

He may not keep his place when Leighton Baines is fit.  That is understandable.  Baines is the best left-back in the Premier League.  He certainly has a worthy replacement though and if he is sold to Manchester United, I would have no qualms about chucking in Bryan and playing him.

What did you make of his performance?  Have your say at www.theevertonforum.com