Following the drab performance in the 1-1 draw with West Bromwich Albion I was disconcerted to see some Everton fans with some quite fierce criticism of Romelu Lukaku.  Lukaku had a poor game against WBA by his standards, but he certainly wasn’t alone as quite a few senior players also had off days – It happens.  Lukaku despite having a quiet game still managed to assist Kevin Mirallas when he flicked the ball into the wingers path for him to notch.

I am quite open to criticising if it is deserved and at the same time I am also open to praising individuals if they perform well, but I feel the flack that Lukaku has started to get recently is a little over the top.

Lets go back to the beginning when Lukaku signed on loan for Everton from Chelsea.  One of the main reasons that Lukaku signedwas for development in his game; i.e. he was still learning his trade.

When Lukaku joined he said: ‘Everton is a good club for me and you can see it’s a good footballing team. For me it was the most important thing that I could learn on the footballing side and be more clever and much more deadly in front of goal.’

Lukaku is a good player and potentially a great player.  He has had to adapt his game over the last few weeks due to a lack of creativity behind him.  When he first came to Everton he was looking for the through ball to make use of explosive speed and strength and quick 1-2’s into feet, but since Barkley and Deulofeu have been injured he has relied on scraps and balls pinged to his head.  Defenders have learnt how to defend him if he has his back to goal and his recent dip in goals is as much his team mates fault as his.

Time and time again Lukaku spins in behind his defender and points where he wants the ball, but the midfielders haven’t been spotting the runs. 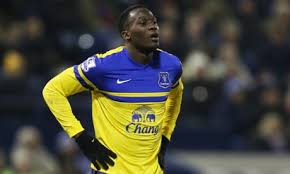 That said, Lukaku is a tremendous talent and people are forgetting the fact that he is only 20 years old.  He is younger than Vellios and only a few months older than Barkley who people are willing to give time and make mistakes.

Lukaku is well above most of his peers and is still a tremendous coup for Everton.  We are lucky to have him and he is lucky to have us.  Some fans need to have a little think about the bigger picture before they have a pop.

He also looks like a 1987 Rakim from Eric B & Rakim with his new barnet, which gets my vote

Do you agree with this or do you think Lukaku should be the complete package already?  Have your say at www.theevertonforum.com