You expect it in warm up games but this is a funny team from England today.

No Morgan, Root, Archer, Rashid and Woakes playing as a batsman only.

Get your phone on David Willey.

Get your phone on David Willey.
Click to expand...

He jogged off, sensible to risk nothing in a glorified net practice

Todays Eng Aus game is a glorified net, not a real odi game, its about taking no risks - anything and a player is not risked or withdrawn. Its not a proper ODI game, it has no status, there are only very loose rules, you can use anyone all the players and even the coaching staff.

It's not a proper game the ODI final at Lord's is.

I wonder who they'll beat during the competition
Click to expand...

For all that it's a shock, it's one team who has forgotten how to win losing after losing ten on the bounce, to another who recently drew 1-1 with Ireland. It was played on a used wicket giving some help to the spinners and completely different to those likely to be prepared for the world cup.

This was a match without ODI status where both sides were allowed to use more than eleven players. Although both these sides look to be peripheral when considering the main protagonists in the forthcoming World Cup, it does fire a warning.

The Afghans are capable of a shock on a used wicket helpful to spin. England must be prepared when they meet at Old Trafford, as that is exactly what they're likely to get. Old Trafford is the only England game in which a used wicket will be used and a huge total shouldn't necessarily be required, they'll need to take the threat of a used wicket seriously and be more watchful.

This is their sixth or seventh game, all in preparation and another on Monday, playing so many so close will always be risky. England expect Mark Wood to get the all clear and give them a World Cup boost after a scan on his ankle showed no serious damage.

Maybe another 'warning' sent out tomorrow when the Afghans beat our kitchen staff?

Wood is fine and Morgan progressing well. The former won't play today, the captain will bat but won't field. Plunkett and Dawson also missing out.

Intrigued to see how England deal with the weight of expectation.

The gung-ho way they play you'd think they'll lose somewhere along the line, just hopefully not when it really matters.

Had India v Bangladesh on.

In the other game the Windies are on for 400 against New Zealand... Lewis, Gayle, Hope, Holder and Russell all in the runs.
Click to expand...

Very difficult to read too much into taking the Bangladeshi attack apart in a friendly but he's never really gone away and is still a huge threat. Uses that bottom hand to dig out balls low on the bat and propel them serious distances.

Kohli failed to make 50 again, looking perhaps as if he needs a few more games and under prepared.

England favourites by some way for me, although Australia are looking decent, I would still back a full strength England to beat them comfortably though.

As ever in knockout cricket like cup competitions, the best side can go out and the fourth best wins it. So India have a decent chance and South Africa, West Indies and New Zealand all in with a chance too.

liquidfootball2 said:
Very difficult to read too much into taking the Bangladeshi attack apart in a friendly but he's never really gone away and is still a huge threat. Uses that bottom hand to dig out balls low on the bat and propel them serious distances.

Kohli failed to make 50 again, looking perhaps as if he needs a few more games and under prepared.

England favourites by some way for me, although Australia are looking decent, I would still nack a full strength England to beat them comfortably though.

As ever in knockout cricket like cup competitions, the best side can go put and the fourth beat wins it. So India have a decent chancs and South Africa, West Indies and New Zealand all in with a chance too.
Click to expand...

England are the worthy favourites. Both because of their record over the last cycle and them being the home nation.

I can't discount India and Australia though, when push comes to shove they often get it together and the like of SA, Pakistan, Windies and NZ are definitely all dangerous to the point they could all go on a run and find themselves in the final.

Thursday will be a good test for England. I rate SA quite highly, especially with the new ball, even without Dale Steyn.

Must admit I don't rate Pakistan's chances one bit, I know they've come from nowhere before and so maybe it's dangerous to write their chances off completely. I could sit on the fence and rate every side as having a chance but for me its between the five mentioned without Pakistan.

South Africa are very formidable and definitely a side who could win the competition, you could hardly ask for a more on form and highly rated team to meet first up, a massively difficult first match.

I know it's only a warm-up played on the 'micro' postage stamp ground that is Bristol, so all the usual qualifications not only apply but can possibly be doubled or trebled, but West Indies monster total of 421 to hammer a New Zealand side who themselves proved far too good for the Indians in their previous warm-up, has underlined just what a threat they are.

I'm thinking England, India and Australia as likely winners with England justifiably favourites, but for me that fourth spot is likely to be between the three of South Africa, West Indies and New Zealand.

Any of the semifinalists will have an excellent chance of winning so it's really open even if the big three are the obvious ones.
Last edited: May 28, 2019 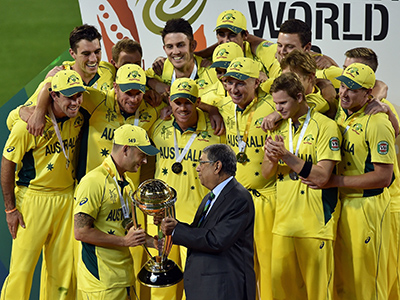 We’ve extensively analysed the Cricket World Cup in England and Wales and have shortlisted our selections for the tournament including straight forecast, top batsman plus top bowler.

I feel batting line ups are getting a lot of attention and can't help thinking it's the bowlers that will win this. I wonder where that puts England's chances. Also a slight concern over how England played against the slower ball.

pablo said:
I feel batting line ups are getting a lot of attention and can't help thinking it's the bowlers that will win this. I wonder where that puts England's chances. Also a slight concern over how England played against the slower ball.
Click to expand...

If England's batting line up fire they will probably win it.

The like of Roy, Bairstow, Root, Buttler and Morgan are severe against any bowling. Other sides have excellent players of their own but I don't think anybody else has a top 5 of that class, power and form coming in.

Stokes and Moeen have been more patchy of late, but have shown over the years that they're also both also capable of a big score in a hurry. Plus both are lefty so provide the top 7 with a nice split of left/right handers.

I wouldn't worry about slower balls and whatnot. These lads have played more than enough T20 cricket to pick up on the variations we get from bowlers.

A slight worry would be how they go against a top class spinner. For instance, last year the Indian left arm leggy, Kuldeep Yadav perplexed them in one game at Trent Bridge taking 5/6 wickets - however the next two games they won and dealt with him much better.

I haven't checked the squads but there will be a handful of class spinners on show who can do that (Rashid Khan, Imran Tahir etc) so they'll have to do the preparation and watch for the hints a bowler gives for his different deliveries.

England's bowling is not as strong as their batting but that's not to say it doesn't have good bowlers...

Woakes is excellent with the new ball
Wood and Archer offer raw pace
Curran bowls well at the death
Plunkett has the knack of picking up wickets in the middle overs
Stokes can fill in and make things happen
Moeen and especially Rashid also pick up wickets when teams try and go after them.
Root offers handy part timers if the surface is right

I believe it's a squad capable of winning it and worthy of being favourites.

My biggest concern is in the mindset when batting. It's fantastic when it works and in fairness, it has done most of the time, but when we lose we tend to get battered because they're instructed to keep playing their shots - so while we will clock up 400s, there's also a 150 all out lurking somewhere.

Souty Africa will be a good test because they have a new ball bowling attack that could see us lose a few early wickets. That's the situation I would fear most for us.

Edit - One thing I forgot to mention is James Vince as the reserve batsman. Vince has shown himself to be an excellent domestic player, but despite a string of fluent little scores has never translated it to the international stage to go big - whereas Alex Hales has, so in an ideal world, I would rather have had Hales ready to step in but unfortunately he's not an option due to his behaviour. So that's one thing I would've preferred with this squad, but when we're talking about reserves, the hope is it doesn't come into the reckoning.
Last edited: May 29, 2019
You must log in or register to reply here.
Share:
Facebook Twitter Reddit Pinterest Tumblr WhatsApp Email Link

Users Who Are Viewing This Thread (Users: 1, Guests: 1)